What better way to show the world how liberated women are in the west than to tell them what they can and cannot wear to the beach. In recent days the burkini has become the target of certain municipal officials in France, but nothing makes an item hotter than a good old fashioned government ban.

Despite fines of 38 Euro for wearing the in cities across France the burkini’s creator, Australian designer Aheda Zanetti, says sales have skyrocketed and some stores are even having trouble stocking the item. The new laws brought some praise from the public but mostly drew ridicule from people around the world. Londoners even threw a “Wear What You Want Beach Party” in front of the French embassy to protest the ban.

So how did the French government come to find the swimwear so intolerable in the first place?

France has been subjected to several deadly, high-profile terrorist attacks over the years that put tremendous strain on an already tense relationship between the non-Muslim and Muslim communities. The root of the debate started with the niqab, a full-face veil, was first targetted because critics claimed it was a manifestation of only the most hardline, extremist Muslims. 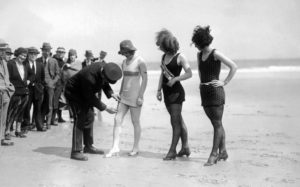 This isn’t the first time women have been told what they can and cannot wear at the beach. (Photo by Underwood Archives/Getty Images)

The burkini debate was first reared its head back in August of 2009 when a woman was refused entry to a public pool for wearing one. At the time there was no official ban on burkinis, but a heated public debate was underway surrounding the possibility of banning the niqab and some saw the burkini as an extension of that issue even though the face of the wearer is uncovered. Disregarding the burkini’s specific purpose as swimwear, the pool defended its actions by citing a law that forbade swimming in street clothes.

Flash forward exactly 7 years and we see the first official ban of the burkini in Cannes, France in August of 2016. The mayor of Cannes David Lisnard claimed that the burkini was a symbol of Islamic extremism, though paradoxically the hijab which also covers the hair but not the head would not be affected by the ban. Several other towns followed suit all claiming the burkini to be a uniform of extremism.

This is where the argument for the ban immediately falls apart. The burkini initial purpose, as stated by its creator, was specifically to encourage religious Muslim women to take part in Australian culture, after all there isn’t an activity much more Australian than going to the beach. It is very doubtful that a hard-line extremist would allow his wife or daughter to go the beach, surrounded by indecent western culture, regardless of what they are wearing.

To add to this the burkini has found appeal with non-Muslim women aswell. Women with various skin and body issues have found the burkini to be an affordable answer to enjoying the beach without risking their health. Women from other religions are also attracted to the burkini, modesty isn’t a tenant of Islam alone after all. Some Mormon women, Hindu and Jewish women have all found comfort in the burkini. The legislation is even so vague that many have pointed out wetsuits would be included. 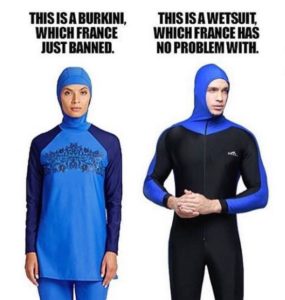 One twitter user raised the question of distinguishing a wetsuit from a burkini.

Which raises the second rationale for the ban; the burkini is a symbol of oppression. It is admittedly difficult to defend traditional position of women in Islam, like many established religions it is more often than not overwhelmingly sexist in its views. However, like most religions, it is still entirely possibly for a woman to adhere to its tenants by her own free will as shocking as it might seem to some. The role of women in Islam is subject for an entirely different essay.

So instead of discussing that issue we will accept the above rationale for the sake of argument. If it is indeed a symbol of oppression, whether it be through overt threat from a partner or subtle pressure from the community, then it is these women who are being oppressed. The ones wearing the burkini are victims of a sexist community.

Never in history has fining and punishing the victim ever liberated a single group. One cannot claim to be liberating women while at the same time dictating what they can wear, to such an extent as to humiliate them by forcing them at gunpoint to show more skin. The idea is so absurd that France should be greatly ashamed that so many of their countrymen have even considered this reasoning seriously. 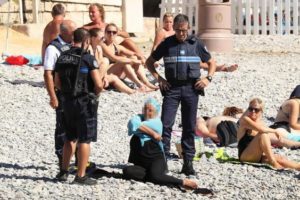 Humiliation and forced dress code in the country of liberté.

These are tense times for the world, especially for Europe. We had a tremendous period of relative peace in the west that is starting to crumble as economic and environmental stress  weighs on the world. Though western Europe has still yet to reach its peak levels of terrorist activity in the 1970s-80s, it certainly appears as though it is a greater threat. For the people of France recent trends have exacted a particularly harsh toll.

We cannot blame them for seeking ways to keep themselves safe. We must, however, protest and criticise them when their efforts steer away from reason and into the realm of xenophobic hatred. When the Niqab debate first began it was worn by only around 2,000 women in all of France according the Ministry of the Interior. Yet it became a dog-whistle issue that some thought would somehow make France a safer place. Since the ban more women than ever are wearing Niqabs in France and extremists use the law as recruitment fodder for disturbed young men.

Muslims make up roughly 7.5% of France’s society. Most of those are not extremists, despite what the right and what ISIS would want you to believe. These communities of immigrants are surrounded by a society that promotes freedom, liberty and equality as its core tennants.  These vitues, shared by 92.5% of the rest of society, will prevail. Younger generations of Muslims will invitably butt heads with the old guard and they will win. They will bring these values to their community. If we take them from them then they cannot adopt them.