Corey Lewandowski, Donald Trump’s campaign manager, was arrested on Tuesday for light battery after an incident with a reporter at a rally. Breitbart reporter Michelle Fields claims that Lewandowski assaulted her after she tried to ask Trump questions, which left bruises on her arm.

A few days later Lewandowski was caught on camera again, this time manhandling a protester. This yet another in a  string of violent outbursts at Trump’s campaign events. Despite all of this Trump has stood by his embattled campaign manager and has even offered to pay the legal fees for a supporter who had punched a protester in the face at a prior rally. That same supporter, 78 year-old John McGraw, later told Inside Edition “next time we might have to kill him.” 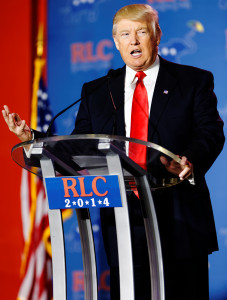 Trump’s pendulum has swung between condemning the violence and actively supporting it, depending on who his audience is. If Trump is talking to reporters or at a debate he becomes weak-kneed and distances himself from his own words. If he is safe on a podium, surrounded by cheering supporters, he calls for violence and laments “the good ol’ days” when protesters were carried away on stretchers. One thing Trump has certainly been able to do, other than gain the lion’s share of media attention, is recapture the political environment of bygone eras.

This represents one of the most worrying aspects of the popular demagogue. In Trump’s own words it is clear that he supports violence not only against opposition protesters but also as a tool to silence media. After Field’s alleged incident Trump commented that he didn’t realize she was from Breitbart, a right-wing media outlet, and that he thought she was a member a mainstream “media rival”. In his mind expelling possibly unfriendly reporters is entirely acceptable.

His excuses are often flimsy. Trump as stated that he believes the protestors have been sent by Hillary Clinton or Bernard Sanders, despite the fact Black Lives Matter and other protesters have demonstrated at both Democratic Party candidates rallies as well, and without violence.

Top GOP politicians have begun to debate whether or not to distance themselves from the frontrunner. In a recent interview Republican bank-roller Charles Koch insinuated Democrat Hillary Clinton may be a better presidential nominee. Republican representative Adam Kinzinger of Illinois said he “would have to do a lot of soul-searching” if Trump became the GOP nominee. Trump’s methods have struck a chord with Republican voters at least, who have continually chosen him in the GOP primaries over rivals Ted Cruz or John Kasich.