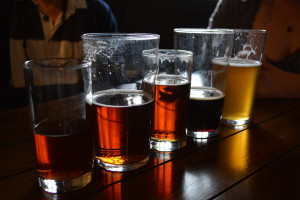 Potterton House is a tiny stone building nestled in the rolling moors of Scotland just outside of Aberdeen. From the outside it looks like a quaint country cottage. As a matter of fact it was so boring a passerby might not even notice it at all. It was in this little unsuspecting scene that one the most daring political coups in all of modern British history was attempted.

Not too far away from that little stone home a group of young revolutionaries began plotting their attack over pitchers of budget bitter in a dank and musty pub. Not much is known about this group except that they were students of and leftists from the University of Aberdeen with the seeds of rebellion fermenting deep inside them. This was the in 1964 after all. Blacks in America were marching for their rights. Socialist revolutions all over the third world were throwing off the shackles of oppression and burning down the old imperial world. Nobody wants to be left out of that sort of fun.

So it comes to no surprise that they took aim at the man who was at the helm of the British Empire at the time, the stuffy and old Prime Minister Alec Douglass-Homes. We’ll just call him Homes so that you don’t fall asleep. Homes was at the University attending a conference for the right-leaning Scottish Unionist Party. Homes is best known for having one of the dullest and most uneventful terms in British history. Well very few combinations can fuel young men to action more than boredom and booze. Except for maybe a chance to get laid, that often works well to.

It all started innocently enough. The group confronted Homes and demanded that he pay them a fine for charity. In return they said they wouldn’t kidnap him. Homes was no fool. He dug deep into his silk pockets and donated the princely sum of £1 for the preservation of the status quo.

The would-be-kidnappers couldn’t help but walk away thinking that they may have been ripped off. While selling out the revolution doesn’t have a set price they thought that £1 may have been too low considering the current market for rebellion, so they left the Prime Minister in order to hash out a new plan. At this point they weren’t just emboldened by liquid courage but also needed to save a little face.

That night a soupy fog rolled in. Homes left the conference in his Rover P5, its circular headlights struggling to cut through the fog. Visibility was so low that he didn’t notice a car tailing him on those winding country roads.

The kidnappers had devised a new plan. Somewhere in the isolated highlands they would stage an accident. The Prime Minister, beholden to public service, would inevitably stop and see if he could be of assistance. That is when they would make their move. He would only be gone for a few hours. Just enough to make the headlines, bring attention to whatever injustices they had in mind and maybe squeeze the Queen for some money.

Unfortunately they had vastly overestimated the Prime Minister’s capacity for giving a rats ass. Sure enough they were able to get ahead of him and pull over. With hood up and looking as pathetic as possible they attempted to wave him down but of course the Prime Minister just kept on rolling. There was no time to help the plebs, he had scotch to drink.

The group scratched their heads for a moment and got back into the car. They followed Homes and debated their next move until they had reached Potterton House. They slowed and idled while Homes pulled in. He got out alone and entered the house.

It was now or never. A better opportunity for change would never present itself again. It was time to make a footnote in history. This wasn’t going to be another half-baked, aborted pub plan like so many others. The group got out, stormed up to the front door and politely knocked. It was the Prime Minister himself who answered, better yet he as alone.

The owner of the house was the Second Baron of Tweedsmuir and he was away at the time. The Baron was a writer, adventurer, naturalist and soldier. Yet despite this impressive pedigree his home was inexplicably too small to house both the Prime Minister and his body guard. Rank won out and the the body guard was forced to stay back in Aberdeen.

So Homes was completely alone when that rhythmic rapping came from the oak doors. On the other side Homes was confronted by a wall of side-burns, long hair and turtle necks. “This is a kidnapping so if you wouldn’t mind coming with us that would be brilliant,” was was by all accounts what the young revolutionaries asked in their standard British politeness.

“I suppose you realize if you do, the Conservatives will win the election by 200 or 300 ,” responded the Prime Minister, but he agreed to go with them. He just needed to pack a few things and of course the students agreed. They were kidnappers not savages.

Neither was Homes and really the whole thing was getting sort of awkward as they stood around waiting, so he did the only natural thing. He offered his kidnappers some beer from the fridge while they waited. They obliged, just being happy for some more beer to help this whole job go a bit smoother. After a while of killing time upstairs the Prime Minister came down and joined them. They were students after all, might as well grab a few before they bled the place dry. It wasn’t long before the holiest of social lubricants had worked it’s magic. They started trading stories. Homes had a few good ones so soon the crowd was laughing, talking and taking pictures with him.

Eventually the Baron of Tweedsmuir returned with his wife and the two joined in. Wine was cracked but by that time enemies had already turned into drinking buddies. The kidnappers finally decided that this cankerous old conservative might not have been as bad as all that after all. They abandoned their plot and made their way back too the University. So it went that one of the biggest security breaches in Prime Ministerial history was thwarted by alcohol.

Go to heaven for the climate and hell for the company.