As we started to settle into our hostel in Kiev, three Brits arrived. They had been on the two day Chernobyl tour and offered us some advice. Bring a lot of water, double what you think you’ll need.  A shit ton. It was useful advice considering the scorching weather. I hadn’t even considered bring any to be honest. “Make sure you don’t get the bubbly stuff, we did that by accident.” After hours of stewing in the sun, the carbonated stuff tends to bring on dry heaves. I may be exaggerating, but the stuff is rather repulsive and best reserved for bitter mixed drinks and re-hydration during the worst of hangovers when no other form of hydration is available.

With that knowledge in hand, we headed of to the nearby Billa grocery store in Maidan Square for a supply of water and beer. Easier said then done. After grabbing a few beers and strolling down the vodka aisle we arrived at the bottled water. (Yes, there is an aisle dedicated to vodka, not unlike the cereal aisle in North America. You can buy the stuff in just about as many varieties too.)  Back in the water aisle we ran into a problem. As it turns out I nor Kathleen can read Cyrillic, a minor hurdle we hadn’t predicted. (Duh). The fact that the shelves we’re stocked with about thirty different bottles of water didn’t help our ordeal. After about five minutes of shaking, squeezing and staring at bottles in an attempted to identify the unholy pressurized bubbly water that might have been enclosed, we swallowed our pride and asked a young guy walking by “Excuse me, do you speak English?”. “Yes”. “Which one of these has bubbles?”. After replying in rather impressive English, he pointed out a bottle and we grabbed a few and were on our way. We needed to get to bed early for our bus to Chernobyl the next morning. Two or three beers then bed.

My alarm always goes off too early. Vacation my ass. The most sleep I’ve gotten so far was on two chairs spooning my bag during a 13 hour layover in Serbia. As it turns out Serbia has rather comfortable chairs and tasty beer. 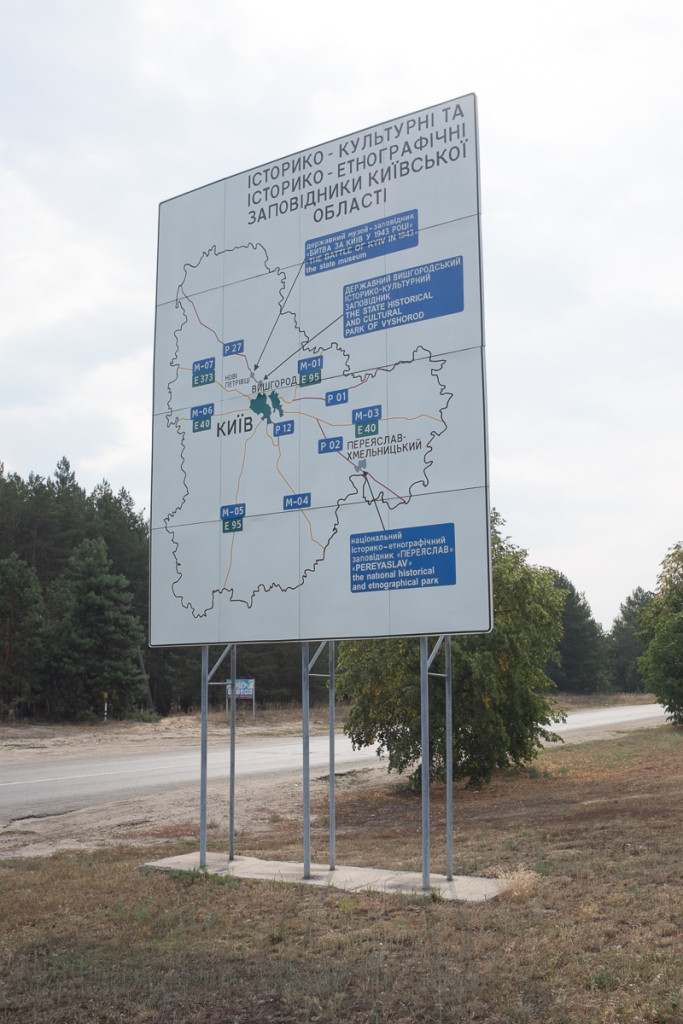 With my alarm going off, I jumped down from the top bunk and clear my throat, a habit that has repulsed and disturbed Kathleen so far on the trip. No one is too eager to get up, but I force myself to rise knowing I still have to take out Ukrainian cash to pay for the tour. After a shower I stroll to a nearby ATM and attempt to take out what I could have only assumed to be an excessive amount of Ukrainian dosh (Dosh). After two attempts at withdrawing 1000 Ukrainian or 10,000 or something like that my debit card stopped working. No problem, I’ll try another ATM on the way to the meeting point. I grabbed the group and we headed off to the meeting place, somewhere near Independence Square. It was either next to the McDonald’s or across from the McDonald’s or facing the McDonald’s. The directions I had got were rather vague. After walking around Independence and Maidan Square for half an hour we couldn’t find it. At this point Kathleen was becoming visibly angry (not a morning person) and evidently it was my fault and problem. (I did in fact book the tour, but fuck, no one tells me anything.) With the bus minutes away from departing, I split off in search of the meeting point. I work better alone after all, easier to keep calm. I told Liam and Kathleen to stay put and keep an eye open and took off to search for any sign of tourists or a bus. After calmy, but frantically making my way back to near the Mcdonald’s I spotted a bus two streets over. I walked over and stood there looking like a lost idiot tourist for a moment before a stockly man in camouflage approached me and asked “Chernobyl?” I had never been so happy to see a fat man in camo before. No wonder he was so hard to find, must have been the camouflage. With my mission accomplished I told him I’d be right back and ran off to get Liam and Kathleen. Obviously after telling them to stay put, they had moved and I couldn’t see them, After a bit of searching I spotted them coming up from an underpass and grabbed them. “I found the bus, lets go.”

Ah, that was a close call. I can relax now. I’ve found the tour, everyone has calmed down. Why do I feel like I’m missing something…. oh fuck.

Back at the meeting point people were starting to gather, later and calmer then myself of course. Money is starting to change hands as our camouflaged friend starts to check names off his list. That moment seemed like a good time to remember that I had yet to visit an ATM, a minor hiccup I had planned on resolving after arriving at the meeting point 15 minutes early. As casually as one can on a busy street, I pulled off my belt and unzipped. (Not my pants, sexual favours have never gotten me far) my secret agen…tourist belt and pulled out my backup US dollars. It wasn’t nearly enough to cover all of us, so I handed the cash to Kathleen while I tried to count out enough for my fare. When Kathleen went to pay I found out the whole ordeal was in vain. It turns out when I booked it through the hostel and paid a deposit, they just paid for the whole thing up front. Apparently I owed the hostel a wad of cash… sure, okay, great. Crisis averted. No one mentioned that. Did we stumble upon a freebie?

Political language. . . is designed to make lies sound truthful and murder respectable, and to give an appearance of solidity to pure wind.