After months of procrastinated planning, I was sitting in a bitterly hipster Hintonburg bar with a couple friends, telling myself I didn’t need to go home early to catch a train to Toronto the next morning. My rational was that I wasn’t driving up and I’d have time for a good long nap on the train to Toronto. Earlier in the year myself and my colleague Connor had decided to cover the Pan Am games. It was being pitched as a big event, but no one particularly seemed to care. The money was there, but the interest wasn’t. Like any good journalist, we decided we should make a trip up to Toronto to cover the opening of the games, just in case something unplanned, disruptive or horrific happened. We were looking for bang bang, but didn’t expect much more then a few mediocre stories and photos. At very least it was an excuse to get drunk in Toronto.

My alarm went off sometime after 5 AM. I had stayed at the bar much later then anticipated and had scrapped into my Toronto budget without even leaving Ottawa. I grabbed my bags which I had drunkenly prepacked the night before and doubled checked my cameras. Batteries good, Memory cards good, Lens cleaner… no. That’d be something Connor would have. I knew his night’s rest would have been better then mine. He would have some. At very worst gin or vodka also makes for good lens cleaner when you’re in a pinch. After being dropped off at the train station I stumbled in to find Connor already waiting, on time as per usual. He even had a coffee.

After a short wait we boarded our train. I grabbed the window seat, not for the view, but for something to rest my head on during my nap. I’ve never been very inclined to sleeping in chairs. At best I get an hours sleep. Throw in a few drinks and I might get a bit more. It’s always hindered me on long haul flights, arriving in a foreign city at 8 in the morning with no sleep, no idea where I am and no clue how to speak the language.  Typically a mild hangover too.

It was too early to order a beer so I ordered a coffee. I was informed that my table would have to be folded down to be served coffee. I thought about it for a moment. After all, I am a grown ass adult, I can handle a cup of coffee and if anything tragic were to happen I have no intention of suing. Too tired to care I lowered my tray and asked for a cream and a sugar. Why not embrace the safety blanket for once, it might keep my toasty warm during my nap.

I’ll save you the story of the train ride. Nothing particularly interesting happened. We arrived at Union station in Toronto around noon. I bid my farewell to Conductor Safety Blanket as we stepped down off the train and on to the platform. I’d like to say the city was a buzz with Pan Am activity, but it was just another week day in the cashola capital of Canada. Boring. Typical. Not wanting to pay for an over-priced dry turkey sandwich on the train, we headed to a Tim Horton’s. Another Coffee and a snack was in order. 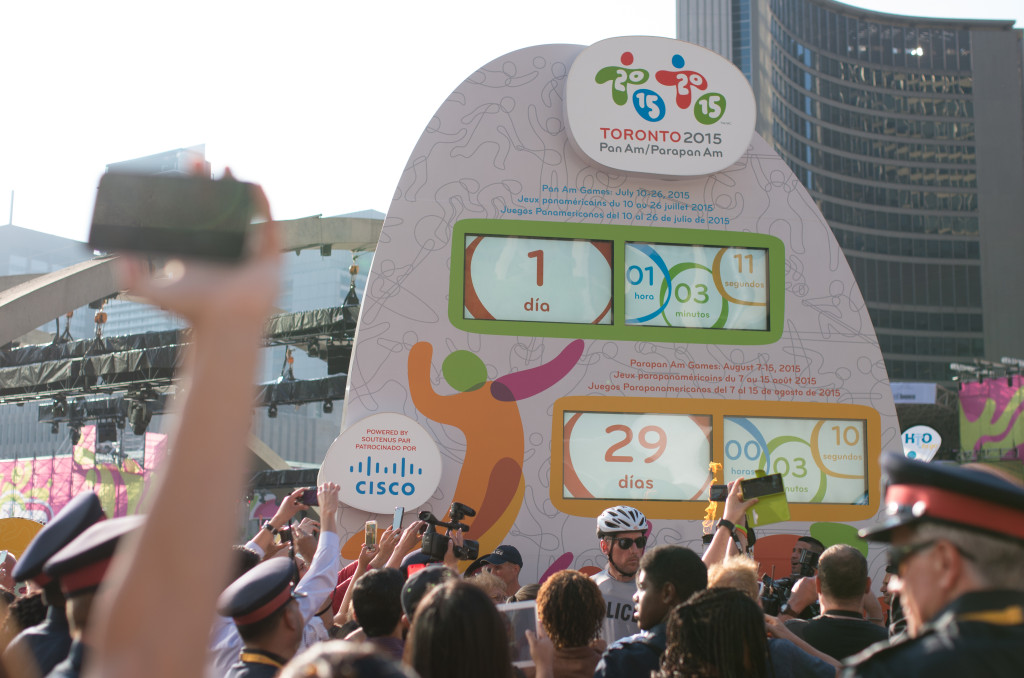 Sitting there I noticed the dress code of downtown Toronto. Every man that walked in was either in a suit or a safety vest. The women all in business attire. One particular construction worker caught my attention. He was union, you could tell. He obviously hadn’t done much work let alone dirty work that day.  This guy was spotless, likely cleaner then a few of the business men. He also wore all his safety gear, fall arrest harness and all, off site. Having worn them myself I can say that I take mine off for lunch, or any spare moment possible. If the constant wedgie isn’t bad enough, they have a tendency to ride the groin. I can only assume he was enjoying the effects of the harness on what was likely his third or fourth coffee break of the day. Dog fucker. He was making puppies, something I’m no stranger to.

We left Tim Horton’s in search of our accommodation. We had booked an Air BnB somewhere just east of the downtown core. It was just over an hour walk. The skyscrapers faded into brick low rises. Low income houses. Gentrification was moving in. Lots were being cleared, fences encircled them with signs for condo sales attached. The further we ventured, the more gentrified the area became. They all had a modern European feeling. but emptier. It was slightly eerie. Deserted pedestrian streets, empty retails “opportunities”. We finally found our building,  a newer looking condo with a coffee shop and subway on the ground floor. Our host had left the keys in a lock box near the door. “It’s the one with my initials scratched in” he had informed us. Easy enough I thought. As it turns out there were about a dozen lock boxes, all identical and side by side. After inspecting them all thoroughly and not finding any sign of markings, I took a leap of faith and picked the one at the far end. I entered the combination and the box opened. Luck. We we’re in.

Lying on the couch in the apartment I decided I should get to work. We hadn’t bothered with media accreditation or official press releases, I just took to twitter in search of leads. Sure enough I found traffic disruptions (the real story Toronto cared about) and noted that the cause was due to the Pan Am torch making it’s way through the downtown core for the opening ceremony the next day. I tracked down the torch’s scheduled stops. We decided to head it off at Queens Park which is home to Ontario’s provincial legislature. With time to kill we walked.

It took the better part of an hour, but we still arrived early. I suggested a quick pit stop at a near by Mexican restaurant we had passed earlier. It was a hot day and all the walking had a cold beer sounding lovely. I talked Connor into a beer break. He usually prefers coffee, but I offering to buy. I owed him a few pints thanks to a previous drunken indiscretion on my part a few week earlier. My compensation offer was an undefined amount of free pints and a punch to the face. He’s yet to have delivered on the punch to the face, even though I insisted upon it. We sat down outside on the patio and I ordered a Sol. To my pleasant surprise free chips and salsa we’re placed in front of us with our beer. Parched from the walk I popped a lime wedge into the bottle and downed the first beer in no time. “Another one?” I asked Connor. He was about a quarter of the way through his. I ordered a second beer. I’d had more beers then photos so far.

A cynic is a man who, when he smells flowers, looks around for a coffin.